Keeping indigenous values at the forefront of community organizing 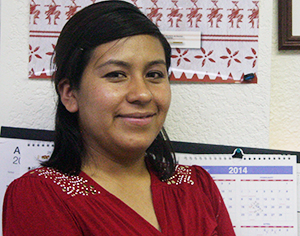 As an organizer working with the ten-year California initiative, Building Healthy Communities (BHC), Miguel Villegas, a Community Worker at Centro Binacional para el Desarrollo Indígena Oaxaqueño (CBDIO), explains his work by saying, “going back to our roots, to the place we come from, we understand the importance of being united to get things done.”

CBDIO is an organization whose mission is to: “foster and strengthen the civic participation, economic, social, cultural development of the indigenous communities, as well as the resistance of the indigenous communities,” and the results of their work are evident in Fresno, California. During the last three years, CBDIO has been involved in both large and small-scale campaigns focused on improving the health of their community through system and policy change. Currently, CBDIO participates in the Building Healthy Communities Neighborhood Team, with Zenaida Ventura continuing their community-engaged organizing efforts.

In working with the indigenous community from Oaxaca, the organizers at CBDIO have found that the residents know exactly what they need. Often, what the residents require is help with how to go about getting those needs met. Walter Ramirez, former Assistant Director, explained that CBDIO focuses on skills such as advocacy training and power mapping, both of which inform residents “who the decision makers are and how the system of government works here.”

In some cases, this discrimination pushes youths within the community to reject their language and culture. “Sometimes our youth feel their language is inferior and they don’t want to practice it,” Miguel said. “It’s a big problem in our community.”

Miguel understands this issue well, as he had a similar experience as a youth. Facing discrimination, he left school for a period and even stopped speaking Mixteco. It was volunteering at CBDIO that reminded him of his language’s value and he went on to help create a space for youths within the community.

From there, Miguel worked with BHC as an interpreter and was able to attend a week-long training course that earned him certification as an interpreter. Now, Miguel teaches language courses at the community level, something that has not been done before in California. “I teach adults and youths who are interested in this language,” Miguel said, “and working with CBDIO helped teach me the importance of Mixteco.”

“We emphasize that language should not be a barrier to resources,” Miguel said. “We give our residents cards that read: ‘I speak Mixteco. Please provide me with an interpreter.’ Now, if an interpreter isn’t provided, they are able to contact us and coordinate interpreting services.”

“When you don’t speak the language that is being spoken around you,” Zenaida Ventura further explains, “simple things are difficult to accomplish. Even calling the doctor is scary.”

Zenaida first began working with CBDIO in 2008. She was introduced to the organization at a CBDIO event and began volunteering while also attending workshops and seminars. Being aware of the issues in her community that she wanted to address, Zenaida credits CBDIO with providing her with the tools to engage system and policy change.

Already providing translation services, Zenaida’s role at CBDIO grew earlier this year when she took on the role of a BHC Community Worker. Now she is hosting meetings with the residents in her community to make positive change happen in their neighborhoods.

CBDIO also provides a space for the community to gather in, so that issues can be discussed in the resident’s language. In keeping with their values, CBDIO welcomes families to attend community meetings and childcare is provided onsite. “The families that we work with always have their children with them,” Walter said. “We cannot let this stop participation. Family is important in our community.”

Speaking Up and Speaking Out

Another value CBDIO upholds is gender equality. “At the beginning, the men were always participating and the women were staying behind at home,” Walter said. “We stress gender equality. Working here, we have pretty equal numbers of women and men working on staff. But as a community, the women are participating more because not only do the women have the time, while the men are working, but because women are starting to step up and take leadership positions.”

Organizers are active in encouraging women to attend community meetings to share their concerns. Ana Arenas, a BHC organizer, explained that in her culture, the role of speaking out was traditionally reserved for men. Changes in life circumstances now mean that more women than men attend community events.

“The men work in the fields all day,” Ana said. “When they get home, they eat dinner and then rest.”

The evening of a meeting, she says, finds many of their female advocates making sure that food is prepared for their families before leaving home. Often women bring their children along to the meetings with them, as childcare is always provided. “In every space we meet, families are welcome,” Miguel said. “We make sure that they know that they’re important.”

In training community leaders, Miguel said it is important residents understand that “to make a change, people have to give their opinions and their voices.”

This may mean, at times, stepping outside of cultural norms. “Everything is very collective,” Walter said, speaking of indigenous culture. “We really wanted the community to participate and they had to learn to speak up about issues.”

Ana said that the effects of CBDIO’s leadership training have been huge. “The community has learned to get along, even if they’re not all from Oaxaca,” she said. “They are learning to find a connection with one another. Because of their leadership training, the residents are becoming so independent about taking care of their community and working together.”

CBDIO’s residents were involved in the plans for the City of Fresno’s General Plan Updates, and the training they received from CBDIO proved to be invaluable when a community-wide issue came up amongst the residents. For many, the Fresno Area Express bus system is their only means of transportation. Some residents walk a full mile, with their children, at times with heavy items such as groceries, to and from bus stops that have no shelter structures to protect them from sun and rain.

Residents took the issue before the City Council, giving a presentation in Mixteco that was interpreted for the council members, only to be told that there were no available funds in the budget to provide bus stop shelters. Instead of deterring residents from pursuing the construction of bus stop shelters, the decision kicked off a media campaign.

“Right now, the residents will ask for anything,” Miguel said. “They used to think no one would care or that they would be ignored because of language differences. That has changed. They understand that they have rights now and there is nothing they can’t do.”